The Rover 220 GSi Turbo is a sports coupe featured in the Choro-Q series. It appeared in Choro-Q HG 4.

The Rover 220 GSi Turbo is a 2-door coupe and was part of the Rover 200 series, which consisted of hatchback, coupe, and convertible models. The last two numbers in the model name indicate the engine size in liters (the Rover 216 has a 1.6-liter engine while the Rover 220 has a 2.0-liter engine, for example). The coupe was added to the Rover 200 series in 1992. The 220 GSi Turbo is the top of the line Rover 200 coupe model, featuring a turbocharged version of the 2.0-liter T-series 16 valve inline-4 engine, cranking out 197 hp and 174 lb/ft of torque. All Rover 220 coupes (both turbo and non-turbo) were equipped with a 5-speed manual transmission, as the 4-speed automatic transmission was only available on the base Rover 216 models.

All 2.0-liter Rover 200 models were discontinued in 1996, which was the same year the 200 series designation was dropped from the now-named Rover Coupe model (the Rover 200 continued on in a redesigned hatchback body style). A 1.8-liter inline-4 replaced the 2.0-liter engine, and production of the Rover Coupe continued until 1998. 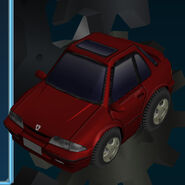 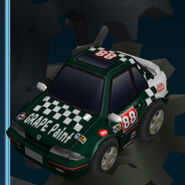 Retrieved from "https://choroq.fandom.com/wiki/Rover_220_GSi_Turbo?oldid=60015"
Community content is available under CC-BY-SA unless otherwise noted.