The Isuzu MU (also known as the Isuzu Amigo in North America, as well as various other names; see below) is an SUV featured in the Choro-Q series. It appeared in the following Choro-Q titles:

The Isuzu MU (which stands for Mysterious Utility) was introduced in 1989 as a 2-door SUV, with the 4-door MU Wizard introduced a year later. This page will focus mainly on the 2-door (MU) version, since that version is featured in the Choro-Q series.

The MU shares front-end components with the Isuzu Faster pickup truck. The 2-door model was available with a 2.6-liter 4ZE1 inline-4 (producing 119 hp and 145 lb/ft of torque) or a 2.8-liter 4JB1-T inline-4 turbodiesel (108 hp and 166 lb/ft of torque), mated to a 5-speed manual transmission and 4-wheel drive. The MU came in Soft Top, Metal Top, or Hard Cover Bright versions; the latter did not actually have a rear roof but instead a hard cover over the cargo area (similar to tonneau covers on pickup trucks).

In 1992, a limited-edition "Sea Side Summer" version was produced.

In 1993, all models were now equipped with a 3.1-liter 4JG2 inline-4 turbodiesel producing 118 hp and 199 lb/ft of torque. Trim lines now consist of S, XS, and XE; both transmissions were available for all trims.

In 1994, "Alive" versions of the S, XS, and XE versions were available. In late 1994, the MU was facelifted, with a larger front grille and restyled front bumper. Trim lines for the facelifted model include Type S and Type X, both with choice of manual or automatic transmissions.

In 1995, the "Alive" version was added to the facelifted model lineup. At the end of the year, trim lines included Type E, Type S, and Type X (again, each trim offered a choice of manual or automatic transmissions).

The Type E trim was dropped from the lineup in 1997.

The MU was sold as the Isuzu Amigo was sold in North America; first-generation Amigo production was from 1990-1994. Much like the initial versions of the MU, the 5-speed manual was the only transmission, but a rear-wheel drive model with a 2.3-liter 4ZD1 inline-4 (producing 96 hp and 123 lb/ft of torque) was the base model. Trims included S and XS; options included air conditioning and rear seats. The diesel engine was not sold in North America. Minor trim changes occurred in 1991 and in 1992, the 2.6-liter engine was made standard and the 4-speed automatic was offered on rear-wheel drive Amigos. For 1994, a third brake light was added, along with power steering and power mirrors; a limited-production XS-F model was produced with features such as 4-wheel ABS and power windows. The larger front grille and restyled front bumper from the MU's facelift appeared on late-1994 Amigos.

In Japan, the Honda Jazz (not to be confused with the current Honda Jazz, which is the European version of the Fit hatchback) was a rebadged MU sold in Japan from 1993-1996. Trim lines included MJ Turbo, MS Turbo, and MX Turbo. All trims came with the 4JG2 turbodiesel, 4-wheel drive, and choice of manual or automatic transmissions.

The Isuzu MU is body number 04 in Choro-Q.

"Always my way, even off road." 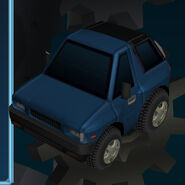 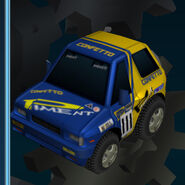 Retrieved from "https://choroq.fandom.com/wiki/Isuzu_MU?oldid=60875"
Community content is available under CC-BY-SA unless otherwise noted.