The Honda S-MX is a compact hatchback featured in the Choro-Q series; it appeared in the following Choro-Q titles:

The S-MX was introduced in 1996, modeled after the Stepwgn, but much smaller in size. All S-MX models have a 2.0-liter B20B inline-4 (producing 128 hp and 135 lb/ft of torque) and a 4-speed automatic transmission (with column shifter). Front- or 4-wheel-drive was available. The S-MX has a 50/50 bench seat in the front and has three doors (there is no right-rear door). Three trims were available: Base, (Base) 4WD, and Lowdown. The base model is front-wheel drive; 4WD adds 4-wheel drive, additional gear selections, and raised ride height by 15 mm; the Lowdown lowers the ride height 15 mm lower (than the base model) and adds a body kit (consisting of front lip spoiler, rear spoiler, side skirts) and 15" 3-spoke wheels. The Lowdown offered orange seats and interior trim pieces (such as air vents, door handles, and speaker covers) as an option.

In 1997, the Lowdown White Stream trim was added to the lineup.

In 1999, the Lowdown Navi Package was added to the lineup, featuring a navigation system. In late 1999, the S-MX was facelifted, with an increase in horsepower (133 hp), the addition of an overdrive gear for the transmission, revised front fascia, body-colored bumpers, and black plastic interior panels.

In 2000, the Lowdown Matal trim and Custom Basic trims were introduced; the Custom Basic lacked features such as a CD player, power mirrors, and tinted window glass. Red replaces orange for the seat trim and interior trim color on the Lowdown model, Lowdown and 4WD models have the option of 4 or 5 passenger configurations, and blue seats became available on the base and 4WD versions.

Two special edition models were introduced: the Aero Style and the Casual Style. The Aero Style includes body kit (front and rear lips, rear spoiler, and side skirts), larger alloy wheels, leather seats and silver dashboard trim. The Casual Style has a wood-trim dashboard, black interior, and alloy wheels with a different design (from the other models).

Production of the S-MX continued through 2002. 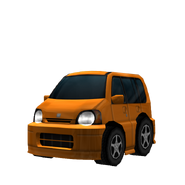 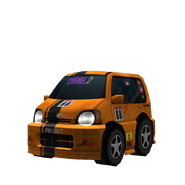 The S-MX is body number Q118 in Choro-Q HG 2. It can be found in the Cloud Hill Body Shop.

Just like in Choro-Q HG 2, the S-MX is body number Q118 in Choro-Q HG 3. It is identical to its HG 2 counterpart except for the coin holder on the back.

It is commonly found on Short Courses. 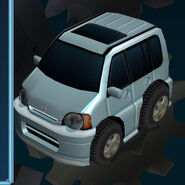 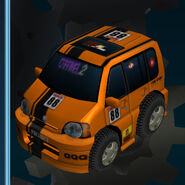 Retrieved from "https://choroq.fandom.com/wiki/Honda_S-MX?oldid=60876"
Community content is available under CC-BY-SA unless otherwise noted.