Choro-Q HG 3 (Japanese: チョロQ HG 3) (also known as Gadget Racers in Europe) is a role-playing, racing game for the PS2. It is the sequel to Choro-Q HG 2. It was also slated to be published in North America by Conspiracy Entertainment under the title Road Trip Adventure Avenue but it was cancelled for unknown reasons.

Choro-Q HG 3 is very similar to Choro-Q HG 2 with many very similar elements in both racing and some open world exploration but there are new things that the player can perform. There are three types of race courses: there are short, middle and long. The player's main goal is to become the legendary meister and there are many races to complete before becoming the meister, each race contains a flag after the player wins or completes the race. The player goes around to four towns to do errands and other sorts of things from the inhabitants that needs help with. There are a few mini-games such as Rental Courses, Drag Racing and also Football Regulation. Players also acquire car bodies after they win a race, the reward for collecting all bodies are the Devil Tyres. Also, players can now acquire new parts that will make them fly, float and go faster to enhance the performance of their cars.

At the start of the game the player is asked to enter the name, the name of the currency that is collected after a race, their liked and disliked food for emails and miscellaneous conversations and favorite famous person. You then start in your garage with no money, a random Short car body and no flags. The player starts in Grunge Garden and there are many helpful cars in the vicinity who can give you hints and information about how to win in races and who the Legendary Meister is.

There are several Biddings given from the inhabitants in each world and they need your help on solving them and also items are also requirements to those that always wanted or convince someone to repent their mistakes. For completing Biddings, there are possibility's of cosmetic items such as Horns, Stickers or Meters, but there are also certain Biddings that unlock Car Bodies that are required for 100% completion.

There are only four towns (one of them has a different size according to the hierarchy, such as a country, a village, a valley, a city, etc.) called Grunge Garden, Echo Forest, Scratch Mountain and Noise City. The four towns are linked by gates with number of flags that is required to access them; Echo Forest and Scratch Mountain require 1 Flag, whilst Noise City requires 11. Towns contain houses, shops, ventures and some towns contain landmarks, workplaces, pubs, tenements and business companies, many of which offer Biddings to the player.

You can still "talk" to other cars by driving up to them, entering a building they're in or honk your horn near them. They can sometimes give you useful information or items, or they may just be happy or angry to talk to you. Some cars ask you to play for a band at the Livehouse; you have the option to hire them, but you may only have one member per instrument.

Gadget Racers is a two-player game as well. Once two controllers are inserted into the PS2, a Two Player option is available at the main menu. The Football game and a few races are available. You can go head-to-head with your friend in race courses and after the races, scores are added up via amounts of wins, and the highest amount of points win.

There are a few mini games in Gadget Racers, accessed either through the Garage or certain buildings that host said games. When completing a race in first place, depending on the size of the race, can unlock one of three minigames: Rolling Boulder on Short races, where the player has to push a giant football one lap through a selected course to receive a small cash reward, Tag for Medium races, where the player has to collide with 11 small cars, if a car is hit 3 times it will vanish; when all cars are gone you'll receive a larger cash reward. Finally, Coin Chase for Large races, where you have to do a lap of selected course while also collecting coins; collecting 200 coins will unlock the Wheelie Coin. Finally, there are a few additional mini games within houses in the overworld. NikoNiko at Grunge Garden has a variety of minigames that give a large amount of money; it's recommended that newer players play the games there for easy money. There is also a Football mini game, although it doesn't offer any rewards, and a Drag Racing game.

Choro-Q HG 3 has been praised for being one of the few Choro-Q games that have excelled in gameplay while focusing mainly on racing and not sandbox.

Despite its age and lack of resources for creating it, Gadget Racers' graphics were extremely improved over its predecessors. Trees and other scenery were considerably upgraded, given a 3D "full" look, and shading & shadowing was programmed into the game, taking effect on houses and buildings. Roads and their surrondings are a lot more detailed, scattered with little features like lamp posts or details on the roads.

Choro-Q HG 3 has often been criticized for its poor physics. These sometimes allow the car to "float" and maintain in-air control in the air for an unrealistic amount of time and also "crash" by glitching into walls, commonly caused by wheelie'ing off a steep cliff.

The game, despite being somewhat seamless, is very limited for a sandbox type game, with some areas being impossible to enter and protected by unknown barriers. 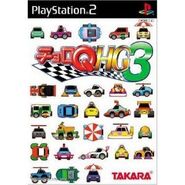 Japanese PlayStation 2 Back Box Art
Add a photo to this gallery
Retrieved from "https://choroq.fandom.com/wiki/Choro-Q_HG_3?oldid=60607"
Community content is available under CC-BY-SA unless otherwise noted.