Choro-Q 2 (Japanese: チョロQ2) is the second 3D Choro-Q racing game released on the Sony PlayStation on February 21, 1997.[1] The game was never released outside of Japan, however there exists a fan translation on the internet.

Choro-Q has many new features and game modes.

When starting a new Aim for the Grand Prix game, the player has the choice of six starting bodies: 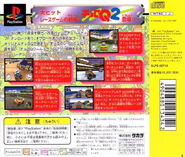 Back cover.
Add a photo to this gallery

Retrieved from "https://choroq.fandom.com/wiki/Choro-Q_2?oldid=59746"
Community content is available under CC-BY-SA unless otherwise noted.